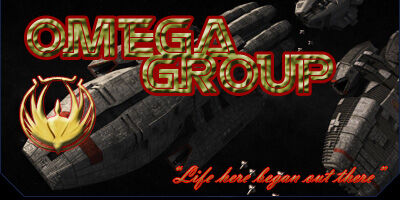 During the First Cylon War there where times when the Colonial Fleet Command thought that these Cylon monsters they had created would fight until the end and try to destroy humanity in its entirety. Then all of a sudden the Cylons sued for peace, the most unexpected move of the whole war. So after the peace talks, the construction of the Armistice Station and the disappearance of the Cylons behind the Armistice Line in search of a new homeworld, Colonial Fleet Command decided that something needed to be done against the threat of another Cylon attack in the future.

Admiral James Lucas came up with a idea to protect humanity as a species if the Cylons attack with genocide in mind; a way to ensure if the fleet was beaten somehow that humanity lived on to fight another day. His idea was to form a secret colony; the last colony of man - the secret colony of man: the lost Colony of Atlantis (C-14). The rest of fleet Command loved the idea; it meant that they could try their hand at colonising a planet and see if they could possibly expand further into the stars in the future and it was a place of security.

Fleet Command charged Admiral Lucas with all the preparation for the building of the colony, from finding a planet, to finding people to colonise the planet. It was agreed that only he would be privy to the planets location and the rest of the Fleet Command would from then on never be told about the location or existence of this colony. For his task Admiral Lucas was given Command of a Fleet named Omega Group. Their role was that of any other fleet in the Colonial Forces; to protect the colonies. They where also given the separate directive where they where allowed to reject orders from fleet command if they had a mission with regards to Atlantis. Admiral Lucas finally found his planet and immediately began the colonisation of the planet, taking ex-servicemen and their families and some citizens from each area of life from the colonies; farming, industry, government, law and so on, and he ruled that any person who moved to the colony would never be allowed to leave it, but they could recommend people to be brought over.

Over the years the Fleet slowly grew along with its parent colony. The fleet became a rather formidable fighting force while the colony grew in size and grew into the millions. Ten years after the First Cylon war and 8 years after the formation of the colony and fleet Admiral Lucas died and it was decided by a committee of those members of the Fleet Command who where alive to remember the secret colony (but obviously not the location) that the Fleet Executive Officer would always be promoted to the rank of Admiral (should the Commander die) and take up the lead of this colony and fleet.

Another Twenty years passed without anything happening and a new officer was assigned command of the Fleet and Colony; Admiral James Roberts. Upon taking command he saw one flaw in Admiral Lucas's design; if the Cylons attacked and somehow took out the whole Colonial Fleet, then how was Atlantis going to (A) protect herself, and (B) build new ships and refurbish old ones to strike back against the Cylons?

So he set his staff to work with the idea of constructing a 'Starbase' that was able to dock ships, would have its own fighter force, its own defensive batteries and missiles, and would also have ship building/Refitting facilities. But while he was waiting he also decided to leave a force of fighters and Marines on the planet and transfer command of the colony to a separate commander.

Eight years after his idea, it became a reality and Fortitude Space Base along with it. It encompassed all the features Admiral Roberts had in mind and it was stationed above Atlantis to protect it. Little did they know that it would be seeing action very soon...