The Cylon War (or "First Cylon War") was a major conflict that ended over forty years prior to the Fall of the Twelve Colonies and caused the death of thousands if not millions of civilians.

The war began when humanity's robotic creation, the Cylons, turned on their "parents" after years of slavery. During the course of the conflict the Cylons used Raiders and basestars, while the Colonials developed the first battlestars and the renowned Viper Mark II.

The conflict lasted for approximately twelve and a half years (4,571 days), and was waged amongst the stars as well as on Colonial soil. Known engagements include the boarding of the Brenik by Cylon Centurions, combat involving the Colonial Marine Corps in the jungles of Medra, the Cylon attack on Tauron and Operation Raptor Talon on the final day of the war.

After both sides fought to exhaustion the war ended in an armistice (possibly the Cimtar Peace Accord), and the Cylons left Colonial space in the middle of the last battles, in order to establish a world of their own. The Colonials built the Armistice Station to maintain diplomatic contact, but this overture was ignored by the Cylons. The immediacy with which the Cylons ended the hostilities could be an indication of the value they placed on their evolution towards becoming organic beings.

Also at this time the Guardians escaped being shut down after taking the First Hybrid on a new type of basestar and leaving the planet where the Hybrids were developed.

Given that the Articles of Colonisation were signed fifty-two years before the Cylon attack, it is possible that the Cylon War was what precipitated the unification of the Twelve Colonies, which may have been separate entities prior to the conflict. The impact of the war may have been the initiative required by the Colonial government to create the Case Orange emergency succession procedures in the event of another catastrophe.

The Cylons viewed their slavery and the subsequent atrocities of the war with mankind as justification for wiping out the Colonies 40 years later. 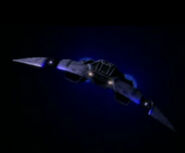 Cylon Raider
Add a photo to this gallery

Retrieved from "https://omegagroup.fandom.com/wiki/Cylon_War?oldid=3924"
Community content is available under CC-BY-SA unless otherwise noted.