The Colonial seal is the official emblem of the Twelve Colonies used by both civilian and military authorities.

It consists of a stylized bird with outstretched wings enclosed by a circle. In some forms, the name of the user is written around it.

The seal is present on all Colonial flags.

The President's office was adorned by a large seal entitled "Office of the President".

The emblem of the Caprica City police also contained the Colonial seal.

It is used by the Colonial government on official documents.

Military vessels have an own seal which contains their name and Battlestar Group. These exist as a patch worn on all uniforms, as a clasp for dress uniforms and as a flag. On battlestars the seal is present in the CIC as metal seal on one of the walls and etched into the glass of the doors. The emblem can also be found in several other places all over the ships, such as podiums in meeting and briefing rooms.

On the Viper Mark VII, the seal is printed in white on the upper forward portion of the wings. Some Mark IIs sport the seal near the wingtips.

Similar to the government, the seal is used on official documentation and correspondence of the Colonial Forces.

The Medal of Distinction is a version of the bird symbol worn on a ribbon. 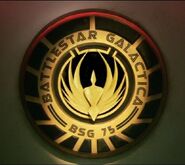 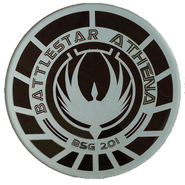 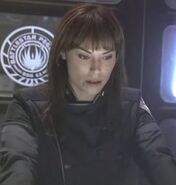 In Pegasus's CIC.
Add a photo to this gallery
Retrieved from "https://omegagroup.fandom.com/wiki/Colonial_seal?oldid=3698"
Community content is available under CC-BY-SA unless otherwise noted.