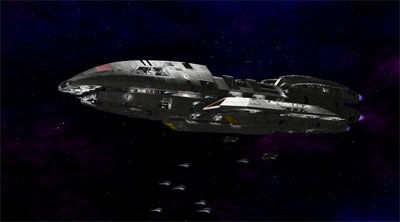 The Megaera is a Mercury Class Battlestar like the Pegasus. It is a mean fighting machine whose sole purpose is to defend humanity against the cylon threat(although before the Cylon surprise attack, it had never seen actual combat). Larger and more armored and armed than Colonial class Battlestars like the Galactica (and newer versions of the Galactica type...), Megaera was designed as a command ship to head an attack group. The Mercury class Megaera never saw combat during the First Cylon war, as the Colonial Class of Battlestars were on the frontline and the Mercury hadn't entered production yet. However, a Colonial class Megaera fought with distinction in the First Cylon War and earned a Presidential Unit Citation for her actions. This new ship would bear the name of her predecessor and inherit her battle honours.

History of the Battlestar Megaera

Megaera is a brand new Mercury class Battlestar and she is currently preparing for an extended shakedown cruise. The cruise will not be an ordinary one, however. The Deputy Minister of Science will be aboard observing the testing of a top secret, experimental 'computer system'. 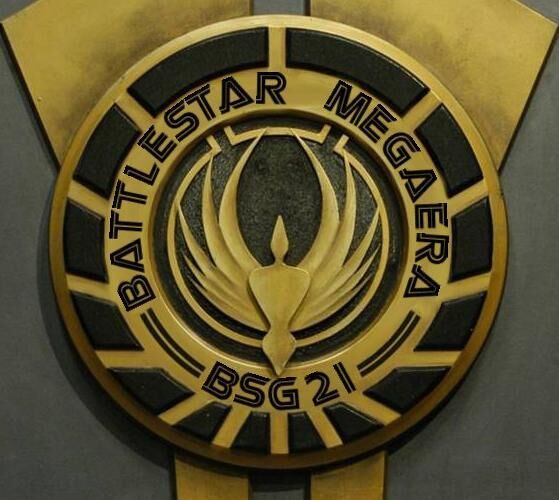 Megaera is fully operational with the exception of the following items. She does not carry the full complement of 8 Viper squadrons, but has only 5 squadrons embarked. She is not armed with Tactical Nuclear Weapons. She does not have the CNP installed (though her Vipers Mk VII's have it installed) since it was judged that it may interfere with the testing of the new system.

Commander Caden Blake has been assigned as the Battlestar's first Commander.

A battle honour is a military tradition practiced in the Colonial Armed Forces and is an official acknowledgement rewarded to military units for their achievements in specific wars or operations of a military campaign. Not every battle fought entitled a unit to a battle honour and a unit need not have defeated the enemy to earn such an honour. Battle honours would be attached to the unit's name and number and any subsequent incarnation of the unit would be entitled to display the battle honours. Therefore if a ship was destroyed and another ship built bearing her name and number, the new ship would be entitled to display the battle honours won by her predecessor.

Battlestar Megaera, BSG-21, is the second ship to bear the name Megaera. The first was a Colonial Class Battlestar that served and fought with distinction in the first Cylon War. She participated, most notably, in one of the final major battles of the war that forced the Cylons to come to the peace table and sign the Cimtar Peace Accords.

The 21st Battlestar Group were cited for exceptionally outstanding performance of duty and extraordinary heroism in action against an armed enemy of the Colonies in defense of Breakwater Station, in the Cylon War conflict. BSG-21 were defending a very critical sector of the battle front during a determined attack by the enemy. The defending units were overwhelmingly outnumbered. The Cylon Fleet drove the full force of its savage assault at the positions held by the 21st Battlestar Group at Breakwater Station. The route of advance that ran through the station's sector to Colonial space was critical as the enemy sought to surprise a regrouping Colonial Fleet. Enemy pressure built up on the sector with sporadic raids and probing attacks. The pressure grew heavier and heavier and BSG-21 were forced into a perimeter defense of Breakwater Station. During the battle, heavy enemy forces had by-passed the staunch defenders and closed all avenues of escape. The courageous soldiers of BSG-21 launched repeated counter-attacks, not designed to break out and retreat, but to keep the enemy pinned and allow the Colonial Fleet time to successfully regroup. These gallant soldiers would not retreat. As they were compressed tighter and tighter in their perimeter defense they called for aid and, even with none forthcoming, they held firm. Completely surrounded by tremendous numbers, these indomitable, resolute, and tenacious soldiers fought back with unsurpassed fortitude and courage. As ammunition ran low and the advancing hordes moved closer and closer, these splendid soldiers fought back viciously to prevent the enemy from overrunning the position and advancing rapidly on the Colonies. Their heroic stand provided the critically needed time to regroup other units and block the advance of the Cylon enemy towards the Colonial homeworlds. Once the main Colonial Fleet had regrouped, time and again efforts were made to reach the beleaguered BSG-21, but the enemy strength blocked each effort. Without thought of defeat or surrender, this heroic force demonstrated superb battlefield courage and discipline. Every kilometer of space they surrendered was covered with destroyed enemy ships until the last gallant soldier of the fighting Battlestar Group were overpowered by the final surge of the enemy masses. After 49 hours of constant battle, Battlestar Megaera was finally destroyed.

The name 'Megaera' shall remain as a proud name in the Fleet Registry and every ship that bears her name, or is attached to her group, shall have the honour of wearing this citation and displaying her battle honours.

The battle honours are not displayed anywhere except on a plaque in the Commander's quarters and recorded in the Fleet Database and Registry. The Presidential Unit Citation is worn on the dress uniform of all officers and crew of the unit.